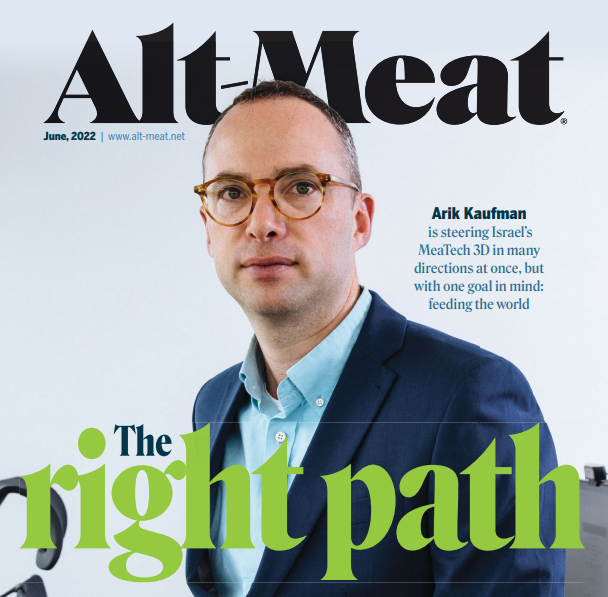 From Arik Kaufman’s perch in his company’s ultra-modern headquarters in Rehovot, Israel, he can see for miles across the ancient landscape, well filled-in with 21st century office developments. A few steps down the hall, he is amongst a futuristic bank of 3D printers of the company’s design, with which the company last December printed a 3.67-ounce steak of muscle tissue and fat, the largest such cultivated meat composition to date, the company said at the time.
Since the company’s operations launched in 2019, MeaTech 3D has moved from a position in the middle of the cultivated meat pack to its front-runner — in technology, in funds raised, and in expansion across the globe. In 2020, MeaTech bought Belgian cultivated fat maker Peace of Meat, and earlier this year announced it would establish a base in California, as well.
“We started the company when we had competitors that were already approximately three years in the game of cultured meat,” Kaufman says. “We tried to differentiate ourselves from them from day one; we had certain printing capabilities that are top-notch. We are in a race — a positive race — to be at the right place once the regulators allow us to sell cultured meat.”
In an interview with Alt-Meat, Kaufman discusses how his position as CEO of a cultivated meat company is part of his journey to change the world.

Alt-Meat: You’ve taken the CEO job at MeaTech (in January) at a pivotal time for any fast-growing startup — between idea and initial funding — and scaled-up production generating revenues. Tell me about your strategy for taking this company from where it is to where it’s going to be.
ARIK KAUFMAN: We foresee regulators approving [cultured meat for human consumption] in the next two years. We thought it would be the United States, but in the last month, we see European countries that are beginning to allow tasting events. So maybe the Europeans will surprise us and will allow us to sell cultured meat before the United States will. Our competitors started before us, and the earlier you start developing your cell line and your growth factors and all the rest of the ingredients, you have an advantage. On the other hand, the amount of [key performance indicators] that [MeaTech has] achieved in two and a half years, if we continue at the same pace, we will be at a comfortable place once the regulators allow us to sell cultured meat. Something that differentiates MeaTech is that from the moment we established the company, we were scale-up-oriented. All our printers are scalable; we already have a scale 3D printer that prints meat. That’s something that will be a challenge for companies that did not conduct their activities [having in mind] that someday they will have to establish a facility. You can purchase bioreactors the size of a building, but it does not mean that you can produce stable products from this bioreactor.

Alt-Meat: How has that ultimate goal of scalability informed your business and science decisions over the last two and a half years?
KAUFMAN: We didn’t start with all the animals, we didn’t start in-house with avian cells and poultry. From day one, we focused only on beef in order to be in a position after, let’s say, one and a half years, to print a beef product. That said, we are expanding our product line because we cannot in the long run be a company that develops only one type of product. We decided [when we acquired Belgian subsidiary Peace of Meat in December 2020] that it was time to purchase a company that had its own specialty in the avian sector. It would take us two or three years to achieve what they already had done. I think that now we are at a comfortable place where we can deliver products that are avian products, we can deliver beef-related products, and we are expanding as time goes by. Regarding our strategy going forward, we have a lot to achieve with respect to business development. That’s my target: to position MeaTech where it belongs at the top of the hill of the cultured companies in the world. I’m happy that the company and the investors gave me the opportunity to deliver as the CEO of the company. 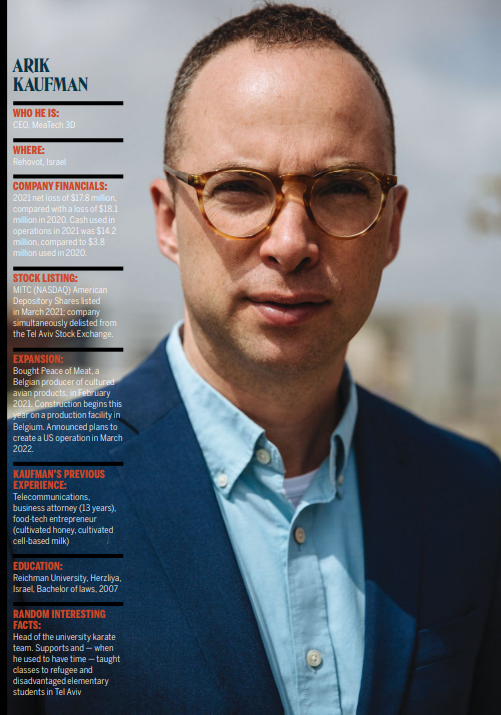 Alt-Meat: Tell me more about the strategy going forward, the market awareness, and addressing the US market, in particular.
KAUFMAN: I believe that this stage requires us to leverage our current infrastructure and scale up and expand internationally, and I think our technological capabilities enable us to evolve and diversify our product pipeline. One of the main goals that I’ve set for myself is to collaborate with the industry and with the strategic companies in this sector. That’s something that I think is crucial to the evolution of MeaTech. We cannot do everything alone. We need the industry to endorse us at the end.

Alt-Meat: When you say ‘endorse,’ — the alternative meat industry seems to be more collaborative than many other industries. Is that what you mean?
KAUFMAN: I believe that the way to advance the [industry] is to join forces. We’ve seen investments of giant companies in our competitors. I don’t think that it’s a barrier. On the other hand, I think that a lot of the collaboration needs to be made with companies that provide certain taste enhancements, protein fermentation, structuring maybe, and a lot of exciting collaborations can be made. We don’t aim to solve all the problems that are related to putting some products on the plate on our own. We want to be realistic with respect to time to market, and if we want to position ourselves as a leading player that aims to deliver some kind of product, then we aim to collaborate with the industry in order to achieve this goal.

Alt-Meat: MeaTech is moving quickly in several different directions. The new species, the combination with Peace of Meat, your partnerships, building plants, and moving into the US market — it does look like a company that’s trying to do everything all at the same time. How does this activity work into that strategy that you have articulated?
KAUFMAN: While it may appear maybe from the outside that there is a defocusing because we are doing a lot of things, I think that in fact, we are seeking to expand our species and product portfolio to better leverage our assets and our capabilities. If you ask me, the pace is not high enough. There’s a lot more to achieve. The bottom line is to introduce cultured products to the global market as quickly as possible. That’s our main strategy. In the end, our base technology addresses various products.

Alt-Meat: Tell me about your partnerships being a key part of your strategy going forward. Can you tell me more about what some of these prospective partnerships are?
KAUFMAN: As we are public, I cannot disclose to whom we are talking, but I can say that we are aiming to collaborate with the giants in this industry. 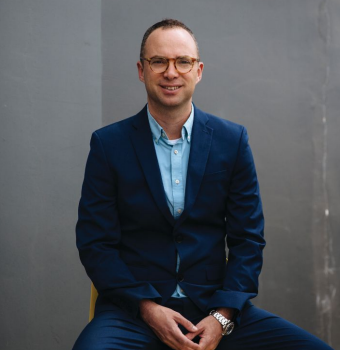 Alt-Meat: The downside of being publicly held is that your financials are known. It’s interesting when a company is in the growing stages, as MeaTech is. Considering the level of activity that you’re pursuing, the cash burn can be unnerving. How is MeaTech handling that part; it’s a race against time, is it not?
KAUFMAN: Yes. As we aim to expand in the world, the capital expenditure is inevitable. We consider on an ongoing basis which areas of our activity get the most attention, budget-wise. And I think that we have both the finances and the financing options to continue our promise. I think that it’s only a question of time when [regulators will permit the sale of cultivated meat and] income will come, and I think that’s the reason that we see hundreds of millions of dollars invested in all of these companies that aim to change the world in the end. Because the economics, the regulators, the governments, they know that it’s the right path to take. Everyone knows that there is no income in these sectors yet. We feel comfortable with respect to where we stand financially, and we will raise [funds] when such action is needed.

Alt-Meat: Along those lines, MeaTech has said that you think that the first products to roll out will be a hybrid plant-based and cultivated product. Do you think that consumers will embrace a hybrid cultivated and plant-based product before they embrace a fully cultured product?
KAUFMAN: [Earlier this year], we conducted a tasting event of hybrid products that were amazing and tasty. I think this whole industry needs to overcome scale-up challenges before cultured meat in full will be available on the market. I think that [hybrid products are] a great way to introduce the world to cultivated meat products because in the end, the process is expensive. I think that the way to overcome this challenge is by way of hybrid products. The moment we have products that have a certain percentage of cultured fat, it’s a game-changer because of the aromas and the texture of a product. I say it because I’ve tasted many times a product that has some percentage of cultured fat inside. You can distinguish it immediately from a product that is 100% plant-based. And at the end, it can assist manufacturers to lower the cost. As I said, further on the road, we will see products that are 100% or almost 100% real meat, as we’ve printed them. I think it’s a natural evolution of this sector.

Alt-Meat: Can you tell the difference between the hybrid product and the conventionally raised meat product
KAUFMAN: Sure. In the end, if you will eat a hamburger or a real steak, and you’ll try to mimic it with a product that is plant-based with some kind of fat or muscle tissue inside, for sure, you can distinguish the real deal. But as I said, it’s an evolution. And the fact that we are able to print a steak that is 100% meat shows the world that it’s doable. In the end, we will have almost 100% meat products in the grocery stores. So we are on the right path.
It’s not like MeaTech is the only one that is taking this path of hybrid products; all our competitors are going the same path. No one is aiming right now from day one to deliver products that are 100% cultured. All of them are talking about hybrid products. In the end, with respect to worldwide scale-up, it relates to food security. We are talking to rural countries where you cannot grow meat. We have connections with countries where there are maybe geopolitical challenges that do not allow them to import or produce meat. We aim to position meat, as I said, at top of the hill. We aim to cooperate with the industry and hopefully disclose exciting new products in the near future.

The original article can be found in ALT Meat.